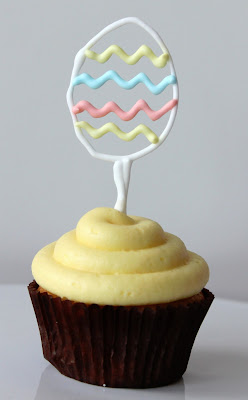 I've been trawling the internet trying to find an Easter cupcake decorating idea that doesn't involve tiny Easter Egg topped cupcakes or chicken cupcakes.  I wanted to try something a bit different.

I saw a pin on Pinterest which inspired this idea.  I soon discovered that I didn't have a very steady hand, and didn't like to pay attention to detail, so they were a bit messy, but I still love how they turned out. 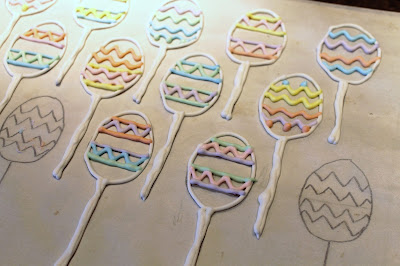 I made up my Royal Icing (I cheat and buy mine in a packet from the supermarket).  I mixed it until peaks appeared, so it was a nice firm consistency for piping.

Flipping my baking paper over, so the drawing was on the opposite side to where I was piping, I then simply piped following the egg design, and decorated them using various colours.  I left them to dry for two days before attempting to use them on the cupcakes.  Its a good idea for the 'stick' part of the design to be quite thick to help avoid snapping while placing them in the cupcakes. 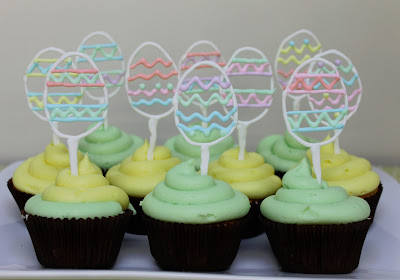 I baked a simple Vanilla cupcake, adding a Mini Creme Egg in each centre before baking, and iced with a Cream Cheese Icing.  Using a kebab stick, I made holes in the cakes first before inserting my Royal Icing Eggs.

This is what happens when you leave a 2 year old unattended with a cupcake (thats my white photography background its squished on) ... I've no idea what she was thinking.  I would of eaten it. 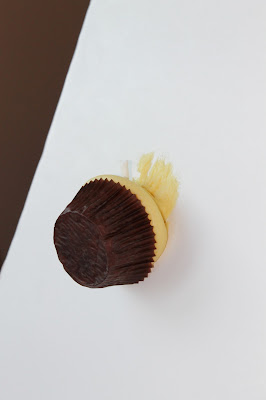 Email ThisBlogThis!Share to TwitterShare to FacebookShare to Pinterest
Labels: Easter, How To, Recipes

These look amazing! I love that they're not 100% perfect (although nearly!), they look handmade and beautiful. Such a cool idea!
Thanks for linking in :)

Julie - Slice in the Life of Julie
Life is full of journeys with 3 children and a house full of crafting and baking goodness. Days are deliciously full of crazy antics, adventures, a pile of fun and a few funny failings. Sprinkled in amongst this are lashings of op-shopping. This blog is a collection of all these things, things I love.